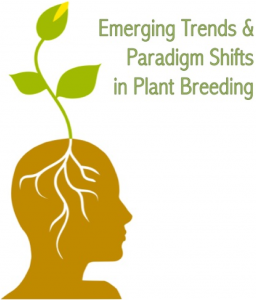 The UW-Madison Plant Sciences Graduate Student Council hosted the 2nd Annual Plant Sciences Symposium Symposium titled Emerging Trends and Paradigm Shifts in Plant Breeding on Friday, September 28, 2012. There were several distinguished speakers,  discussions about plant genetics, and catered food. The event was held in the Varsity room at Union South at UW-Madison. The symposium was also viewable via online streaming for the first time for those unable to attend in person. The symposium featured talks from six accomplished and dynamic scientists, as well as a student poster session.

Paul Stephens began his career with Pioneer in 1993 when he was hired to initiate a new soybean research center in northern Illinois. Paul is a native of west central Illinois where he grew up on a grain and livestock farm. He received his B.S. in Agronomy at Iowa State University and his M.S. and Ph.D. at University of Illinois in soybean breeding and genetics.

Prior to joining Pioneer, Paul held a post-doctoral position at University of Illinois working on soybean molecular genetics. Once with Pioneer, he was promoted to Senior Scientist 1998, then to Research Fellow in 2008. In May 2010, Paul accepted the Senior Research Director role for Pioneer’s soybean product development group.

José Crossa is a Principal Scientist at the International Maize and Wheat Improvement Center in Mexico in the Crop Research Informatics Lab and Biometrics and Statistics Unit. He earned his B.S. in Agriculture at Universidad de la República Oriental del Uruguay in 1974 and his Ph.D. at University of Nebraska-Lincoln in 1984.

Dr. Schnable’s research program emphasizes interdisciplinary approaches to understanding plant biology. His own expertise is in the areas of genetics, molecular biology and genomics, but he collaborates with researchers in diverse fields, including biochemistry, plant breeding, plant physiology, bioinformatics, and computer science.

Kevin Folta is an Associate Professor at University of Florida and Graduate Coordinator for the Plant Molecular and Cellular Biology program.

Dr. Folta’s research program leverages the power of the efficient strawberry transformation system to test the roles of novel genes in strawberry fruit quality, with a focus on flavor, and studies the effects of light on plant form and function using the Arabidopsis model system. He also embraces public education in hot-button issues such as GMOs, climate change, vaccines, and evolution.

Molly Jahn received a B.A. with distinction in Biology at Swarthmore College and holds graduate degrees from MIT and Cornell University. She is a Professor in the Laboratory of Genetics and Department of Agronomy and Special Advisor to the Provost for Sustainability Sciences at University of Wisconsin-Madison. In 2011, she was selected to represent the U.S. on the International Commission for Sustainable Agriculture and Climate Change.

Dr. Jahn’s research focuses on molecular genetics of disease resistance and quality traits. She has also worked extensively in developing countries to link crop breeding with improved human nutrition and welfare. Her innovative approaches to inter-sector partnerships, engagement with emerging institutions, and integrated projects focused on impact, civic science and technology transfer have been highlighted in numerous studies and books.

Although the Plant Sciences Symposium is a student-run event, we would not be able to accomplish it without help from many others. Funding was graciously provided by DuPont Pioneer, the Associated Students of Madison, and the Departments of Agronomy and Plant Breeding and Plant Genetics. We would also like to acknowledge the support of the faculty in our various departments.